Zen and The Art of Letting Go. 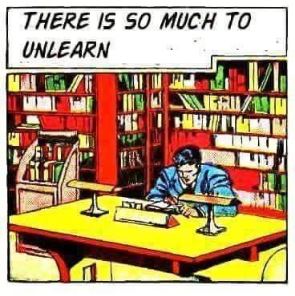 Zen and the art of letting go.
I came across the Zen practice of the Unlearned State about two years ago. It immediately fascinated me. I interpreted it to mean the intellectual side of letting go rather than the emotional side of letting go.. I interpreted it like this…….
Vigorously checking every belief to see if I hold it to be a truth. And thus to let go of things I hold to be truths that are not, or can’t be proven to be so. Or to put it simply…is this true or just an opinion? If it’s an opinion can I let it go?
This removes attachment to views, beliefs and opinions. In short it de-programmes the familial, social and educational conditioning. It’s a return to the childlike beginners mind that doesn’t cling to human constructs.
The practice.
1. What is a belief I have? Can the belief be proven as a truth?
2. If it can’t be proven to be a truth then can it be dropped/let go of, ie am I deceiving myself that it is a truth when it’s not?
3. If it can be let go of it’s one less thing to be attached to.
4. If there is resistance then I know I’ve gotten attached to something and there’s more letting go to be done with this belief.
The Unlearned State is a mind that doesn’t cling to beliefs and lets go of beliefs that it has adopted as truths.
I see this as the open mind that accompanies the open heart.
I’ve been really enjoying practising it. I’ve let go of some things, seen the limits of science, religion, philosophy & spirituality and got to know some of my intellectual attachments.
It feels lighter, less complex, more simple.